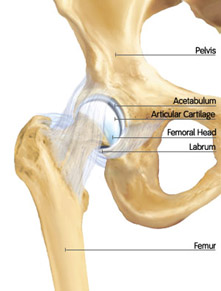 The hip, like the shoulder, has a labrum; a ring of rubbery fibrocartilage around the rim of the acetabulum, which deepens the hip socket and acts as the suction seal of the hip joint.  The intact labrum seals the lubricating fluid within the hip and contributes to stability of the joint.  One of the most common causes of hip pain involves damage to the labrum, described most often as a “labral tear”.

When the labrum is torn, the “suction seal” is broken, and the joint may lose its stability and lubrication.  This can progress to loss of cartilage, or potentially early arthritis.  Degenerative changes in the hip can also result in arthritis.  Arthritis is the damage to the articular cartilage of the joint that lies of the head of the femur and the acetabulum, or the socket.  The joint capsule is an envelope of ligaments that encloses the hip, and is also essential for stability.  The hip also contains a ligament known as the ligamentum teres, which connects the femoral head to the acetabulum.  Both the capsule and the ligamentum teres can be injured in an unstable hip.

The pelvis is a large, flattened, irregularly shaped bone, constricted in the center and expanded above and below.  It consists of three parts: ilium, ischium, and pubis.

The socket, acetabulum, is situated on the outer surface of the bone and joins to the head of the femur to form the hip joint.

The femur is the longest bone in the human skeleton.  It joins to the pelvis, acetabulum, to form the hip joint